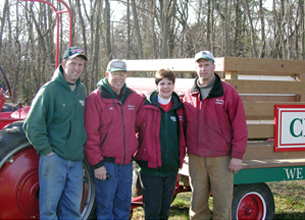 Exley’s Landscaping Service, Inc. began over four decades ago by W. Robert Exley. It began as a lawn service, but flourished to include landscaping as well. As time progressed and business steadily grew, Robert and his wife Amelia purchased more land in hopes of starting a Christmas tree farm and retail garden center. In 1980, the garden center was open for business and a new era of Exleys had begun. By the early 1990’s, both of Robert’s sons had graduated from Temple University with degrees in Landscape Design.

They joined the team and brought new areas of expertise to Exley’s. Exley’s was now a robust company with a culmination of talents and abilities that could transform any property to a paradise oasis. Although, they have achieved great success in the business, they stay dedicated to their customers and can always be found on site constantly interacting with homeowners to ensure total customer satisfaction.